Our village was honored to host Dr. Walkie Charles from UAF to teach a four day Yup’ik grammar course, based on “A Practical Grammar of the Central Alaskan Yup’ik Eskimo Language” by Steven Jacobson. We had 18 learners and two fluent elders attending in two groups. I appreciate the level of enthusiasm of this community; please keep it up because the second workshop will be held in Igiugig around May 12. Some reflections from that class were shared in his presentation titled “We Will Get There When We Get There: A Cooperative Learning of the Yup’ik Language Across Generations” which he provided at the Alaska Anthropological Association’s 45th annual meeting in Anchorage.

At that same conference, I was also able to share about our language project through the presentation titled: “Igyararmiut Path of Cultural Revitalization”, and attended a session on Alaska Native Language Studies. Dr. Mitchell shared “Best Practices in Revitalizing Endangered Alaskan Languages,” which was very helpful: “Language demographics –especially the number of fluent speakers and the age structure of fluent speakers –indicate which revitalization efforts may be the most successful, generally either language nests and language immersion schools or master-apprentice language teams.” His handout indicates that when the youngest speakers are elders (all of Lake Iliamna region), then the best practice includes to: work at language normalization, master-apprentice model, teach language classes in school by training apprentices to teach as they learn. I felt reassured that this approach we are trying in Igiugig over the course of three years has been grueling, and trial-and-error to what fits our community, but the general structure was designed around these best practices. There was also a presentation from the Alaska Native Language Preservation Advisory Council (facebook.com/anlpac), on their 2018 policy recommendations to the State. I also had the privilege of attending Yoko Kugo’s presentation on Lake Iliamna Place-names and discuss the elders workshop we are trying to host May 15-16 in Newhalen. Last but not least, I was able to see a presentation on the work that Monty Rogers does with his firm called Cultural Alaska, and I am happy to report that he will be joining us at our Annual Goose Camp to do arrow making.

We have also continued to host Master-Apprentice soup nights at my house at least twice monthly and have now added Tuesday “Blue Book” study nights to the list of Yup’ik activities. Unglu, our language nest, continues to be held in the mornings at the Triple Wide and the babies are growing more verbal everyday. Some of their first and most often used Yup’ik words are “Tai-tai” (come here), “Awa!” (out of the way), “Cali” (more), “Quyana” (thank you), “Tua-i” (done), “Takuqaq” (brown bear, and definitely growling and acting like one) and “Waqaa” (hello). They are good at using these commands and associating a Yup’ik name, i.e. “Tai-tai Apapi”, “Avaa Qayaa”, etc. They also know and can identify at least ten assorted Alaskan animals and can point out their ears, eyes, nose, and other parts. It is really entertaining to watch them in action, and it is growing increasingly harder to keep all of their attention spans at once.

Nalluyagucakunaku (don’t you forget it!) – our language grant comes to an end at the end of July so we are about to enter our final quarter and will have to brainstorm ways to continue the momentum without federal funding. Quyana! 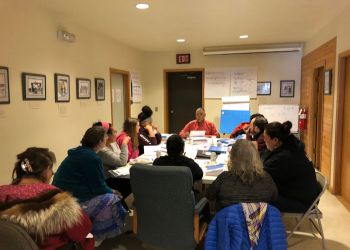 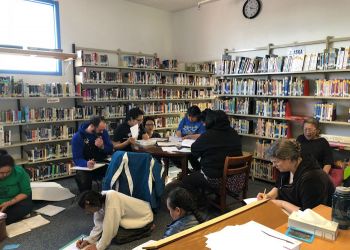