On Thursday, January 25th, a woman named Emily Johnston led a dance fan making class for the people who are apart of the Yup’ik program. It took place at the Hangar where 13 people attended. Emily is a master grass weaver and can make anything from baskets to dance fans, and I happened to be in that class. I have always wanted my own pair of dance fans and it was a thing I could look forward to and be proud of.

Our first day was slow. Emily started us all out with a grass knot and she wove around it with another grass blade. Obviously she is very skilled. She didn’t even have to look down at what she was doing. she said that she does it only by feel. She turned and looked at me, then down at the grass, “She is still young, she will pick it up quickly.” She said in a relaxed tone. After Emily gave me my grass and needle, I started to sew. It was very challenging since it was my very first time ever making a dance fan. We had 3 to 4 foldout tables stretched across the room, covered with grass, water bowls, and busy hands.

After an hour or so, I saw that I was sewing in the same place, and I looked at everyone else’s and saw that their sewing was neat and symmetrical. I looked at mine in disappointment, in my hands was a sloppy, frayed and thick grass spiral. Seeking for help, I asked Emily what I could do to make it better, but she was proud, she said that mine was very good for a start. She took my developing dance fan and held it up in the air, “Look!” Everyone’s eyes turned to my fan, a series of gasps and awes echoed through the room. I gained a little more confidence from her compliment, but still, I asked my mom to do some stitches so I could follow along. I then realized that I had to stitch on top of the other stitches. So it would create a spiral and increase in size. (instead of stitching in the same area.)

It was already 7:00. Too soon, Emily told us to store our fans in the fridge to keep them dry and decrease the chance of them molding. At the end of the day, my spiral was probably only the size of a silver dollar.

Friday morning, I was excused from school early so I could participate in the class. By lunch my dance fan was slowly getting bigger. And I had just gotten the gist of it. We had lots of fun exchanging laughs and funny stories when we were all little babies. “Slow by slow,” that was our motto in the class. Kids and other people came and went, observing our hard work, and eating the complimentary snacks on the table.

We powered through the day. One by one, people were already starting on their color designs, while I was still trying to get my dance fan bigger. I envied my mom, for she was just finishing her color and almost starting her other dance fan.

When I would get frustrated, because my grass kept fraying from not wetting it with water, I would thrust the grass spiral in my mom’s direction and ask her if she could do a couple stitches. By the time she handed it back to me, she had sewed the whole length of the thread, so my requests were starting to lessen. Time went by fast once again, but I still wasn't ready for color. So I took mine home and worked on it through the night.

It was Saturday. Although I was very close to doing color designs, I still had to sew one or two more times around. At last, I was onto color. I glanced at my other sewing comrades and got an inspired design. We had all kinds of colored grass, from a deep rich blue to grass that had multiple colors on it. So I had my mom once again help me start out on my color design. I wanted my design to look like berries. I took pieces of multicolored grass, and the deep rich, shiny blue and wetted them with water. Julie was way ahead of the game, since she was already finished with her first and halfway finished with her second dance fan.

The dance fan design I did wasn’t the way I wanted it to look. The dips of blue were uneven and the multicolored grass didn't match. I turned to Emily, frantic for help, “Do you think that you can..... um, take these out?” I said somberly.

“I am afraid that you’ve went too far for me to undo it. I like that design very much, I would hate if you were to redo it,” she replied.

The compliment didn’t help me very much and I sulked while I sewed. When I went all the way around the dancefan, the color looked pretty good, it was surprising. But my excitement receded, since I had to sew one last time around before I can start on my handle.

I decided not to join in the game because it was an opportunity to catch up to everyone while they were taking a break. By the time they were done, I was finished with the grass part of my dance fan and was ready for the handle. My mom had showed me to wrap strands of grass with another piece of grass tightly all the way to the end where I had to sew the end of the handle.

I looked at my almost finished dance fan in triumph, it looked awesome. Emily and my mom helped me with my fur attachment.

“Take your time, it's best to go slow, you don't want to go too fast or it will rip,” she said. So I carefully stitched the fur on, I wanted my dance fan to be just right. (although I did have my mom sew some stitches.) And I was done! It was such a relief, but I had to start all over with my second one, so it was a bittersweet moment.

That night we had a small potluck as a thank you to Emily. We had all kinds of native foods and cupcakes I had baked earlier that morning. After the potluck I stayed to start off my second dance fan which Emily helped me out on. She left on Sunday morning but we still had a couple hours left before she returned to Anchorage. So I took that opportunity and got as much help and advice as I needed. When Emily left, I spent the day working on my second dance fan. It wasn't as good as the first, since the color and size didn’t quite match up. But I did finish it faster than expected. Now that I know how to, I look forward to making more dance fans in the future. 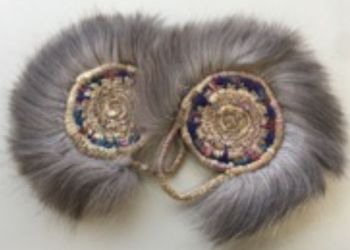 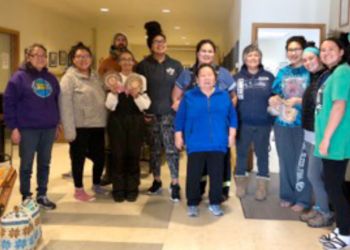 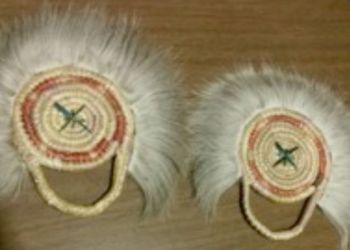