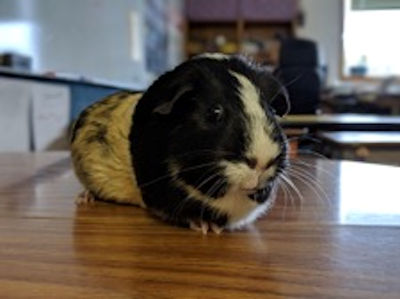 Peaky Keaky had a secret. Peaky Keaky entertains the children in Igiugig School during the school day, but after she sleeps, she grabs her cape and jumps onto the floor. Sneaky Peaky runs. She jumps! She flies! Mr. Gifford cannot see Peaky Keaky or else Peaky Keaky will turn invisible forever. Peaky Keaky has to drink water to turn back to normal.

Peaky Keaky and Sporkidding are about to battle. Peaky turns on her small, quick laser. Zam! She almost hits Sporkidding! Sporkidding crawls towards her. The thick laser comes out of Peaky’s head. It cuts off one of Sporkidding’s legs, but Sporkidding can grow back his legs in one minute! If Peaky does not hurry up, Sporkidding could jump out at any moment.

She runs as fast as she can along the wall so that Mr. Gifford won’t see her. Then, Peaky jumps into the food cabinet for a burger and fries! It’s a hard night of work! When the children come in, Peaky was sleeping on the job.