This year multiple archeologists came to Igiugig to map out sites such as Qusgiq and Old Igiugig. I went on two archeological expeditions, one with Sean Mack and Rita Miraglia, and another with Monty Rogers, both in the late summer.

With Sean, Rita, and a group of villagers, I boated down to Qusgiq. The main purpose of the expedition was to help Sean and Rita get to know the land better. We explored Qusgiq and went to the Men’s House. I’ve been there before but each time I go there I feel excited about how people used to meet there. Adding to the excitement is the fact that the depression of the Men’s House is incredibly deep. After our brief visit at Qusgiq, we cruised over to Old Igiugig. 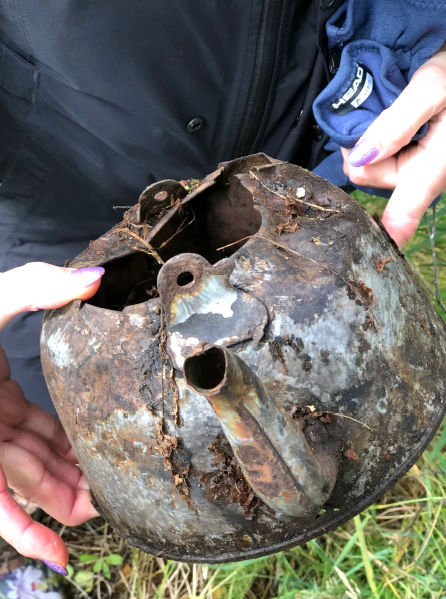 We found bear sign and visited the Repatriation site, where, at a ceremony last year, the village reburied the bones of ancestors taken by the Smithsonian many years ago. We discovered the white crosses had been broken by what Sean and Rita suspected to be a bear. We made our way back down to the river where we boarded the boat and sped on back to Igiugig.

With Monty, we went to Old Igiugig, where we interviewed Betsy Hostetter, a resident of Igiugig, about the history of the site because her ancestors had lived there. We found a few artifacts, including a tin teapot and barrel bindings, which would have gone around a wooden barrel to hold the planks together. Then we went to the site where Monty suspected the Men’s House was. The site was pretty wide and really deep. We hiked around looking for more house sites before returning to the boats.

Later that day, Monty presented to the community on all of our findings and showed us the map he had made of Old Igiugig. It was really amazing being able to take part in the expeditions that, for me, unearth the importance of Qusgiq and Old Igiugig.