On Wednesday, January 30, the Igiugig basketball team of three along with coach Christina took off to Port Heiden for the 2019 basketball jamboree.

The first day when we were there, the day mainly consisted of the teams flying in on Lake and Pen Air’s caravans. When I first walked in, the gym was way smaller than I anticipated. I thought Igiugig had the smallest gym in the district but I was proved wrong by the Meshik school’s gym. To put it in perspective, I could take three long lunges and I’ll already be at the half court line. The three pointer lines graze the half court line, it looked unusual and, like I said, small, confined, suffocating.

We had put our bags along the wall on the perimeter of the gym, I felt like I packed too much. Four bags; my backpack with my computer, my bag with all my clothes and essentials, air mattress, and my sleeping bag. I looked like a colorful sack of nylon carrying my bags around. Not to forget that we have to wear our winter gear to travel for sport events. I felt really tall standing in the gym with my big feet and baggy sweater. I mostly hanged out with the kids from Port Heiden, they told me about the things that happened lately and the reason why there’s security cameras dotted throughout the premises.

We didn’t have any games the first day, I was starting to become restless, I just wanted the jamboree to be done and over with. I knew that it was going to be exhausting and I was not looking forward to the tiredness and enervation. Maxine, the coach for Port Heiden insisted that she could fill up our water bottles with good water since the school’s water has been on a boil water notice.

Nondalton’s coach announced that they were going to go out for a walk to the beach. A small group of kids formed a circle at the entrance of the school. We walked a mile or so before reaching the beach. Gray water was seen for miles. It was low tide, the black sand exposed pumice rocks and clamshells. There were obvious signs of serious erosion happening on the bank. We walked a quarter mile more before turning back after hearing that Nondalton had a game in thirty minutes.

When we reached the school, I realized that my bags were gone from the gym. Christina told me that they moved all the student’s bags to the high-school classroom. Christina had Beatrice with her so she was able to sleep in a storage room apart from the classrooms. Being the only girl on the team, I took the advantage to ask coach if I could sleep in the same room as her. It may not be viewed as a luxury but during sporting events, but you are extremely lucky to have a seperate room away from everybody let alone have your mattress out all day instead of packing it away every morning. The room was fairly small but just the right size for two people and a queen size air mattress. It was located upstairs that had the perfect view of the gym below.

The next two days I was milling between the high-school classroom, the gym bleachers, and the room upstairs. Breakfast was alright, we were thankful for the cooks, cheesy eggs and potatoes was a pretty good way to kickstart the morning. We were lucky enough to find out that the Port Heiden student government was selling espresso coffees. I was granted a 30 minute but turned out to be a 3 hour internet voucher that morning after sweeping the gym before the games started. The Igiugig team had one game on the second day but they were not until later in the evening. For the entire day I hung out in the classroom making conversation with teachers and people from other villages. Finally, at 7:00 p.m we suited up and stretched in the gym. I tied on my electric blue Jordans and ran five quick laps around the gym. It was equivalent to 3 laps around the Igiugig gym. The warmups were layups, free throws, and then just messing around for the last three minutes before circling up for a team meeting. We had a Levelock sub for me, her name was Karen. Our first game we went up against Port Heiden Varsity. Aiden, Sim, and I were the first ones out on the court. Running on it felt hollow, you could feel every step. I played the first three eight-minute quarters before Karen subbed in for me. The gym was hot, stuffy, suffocating. When you started to sweat, you couldn’t stop. We lost the game against Port Heiden varsity, but at least it was fun.

On the third day was when we had the most games. Three games in total, eight minute quarters. Which is equivalent to an hour and a half of straight running and basketball. Sim and Aiden played in all the games save for the occasional sub. I ran the second and fourth quarters while Karen did the first and third. I would get restless, I wanted to get out there and power through the court. I was definitely faster and had more energy than I did during our practices. I pushed hard to make sure I was down the court. We played the first out of the three games but the second was right after the game after us, so I didn’t bother to change back into my regular clothes. The third game was at 3:45 boy, I was tired. I washed my face with water and took a nap in the upstairs room before changing back into my damp jersey. People milled about the hallways and classrooms. The school was small for twenty-eight people coming to the jamboree, but the community coming and going is what made it busy.

The last full day was the most exhausting day. Our last game was the first game of the morning. Right after the 7:30 breakfast, we suited up in our fresh jerseys (We got the chance last night to wash them) for our 8:15 a.m game. I couldn’t wake up on the court, no matter how much I stretched, ran, or warmed up I still felt that sluggish feeling as if you just woke up. I ran slow, and I really needed to push myself forward to actually run. I was slow, and my muscles ached. We won the game, and I was eager to change out of my clothes and take a shower.

I took another nap for an hour and a half then went down to the classroom to listen to music and hang out with friends. My heavy routine was between going to the bleachers, classroom, and the room upstairs for most of the day. For dinner, the community brought in local foods for a potluck. It was the best food I’ve eaten during my time there. Later, we had a dance. It was pretty sad, only a handful of people were actually out there dancing. Most of the kids were either sitting on the bleachers or in the classroom watching movies.

We spent most of the morning cleaning up the classrooms and the gym. Igiugig was the second flight out so it was pretty early. We piled our bags into the school trucks and said goodbyes and thank you to people and the staff. I never really noticed how exhausted I was until I looked in the mirror and realized how pale I looked and how dark the circles under my eyes were when I got home. It looked like as if I gotten beat up. My voice sounded hoarse and groggy for the next couple days. I didn’t look so good.

Overall the jamboree was pretty fun. Sure it was tiring but that didn’t beat out the fun I had there. It was a great experience of high school sports and I look forward to doing it again next year. 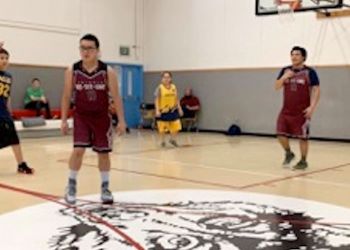 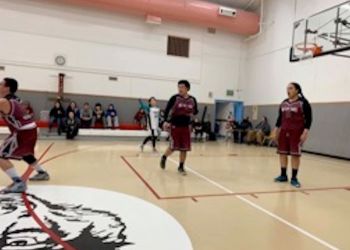 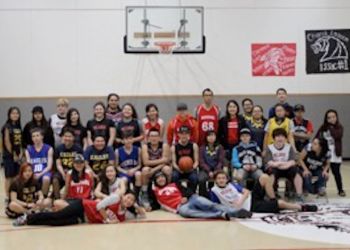