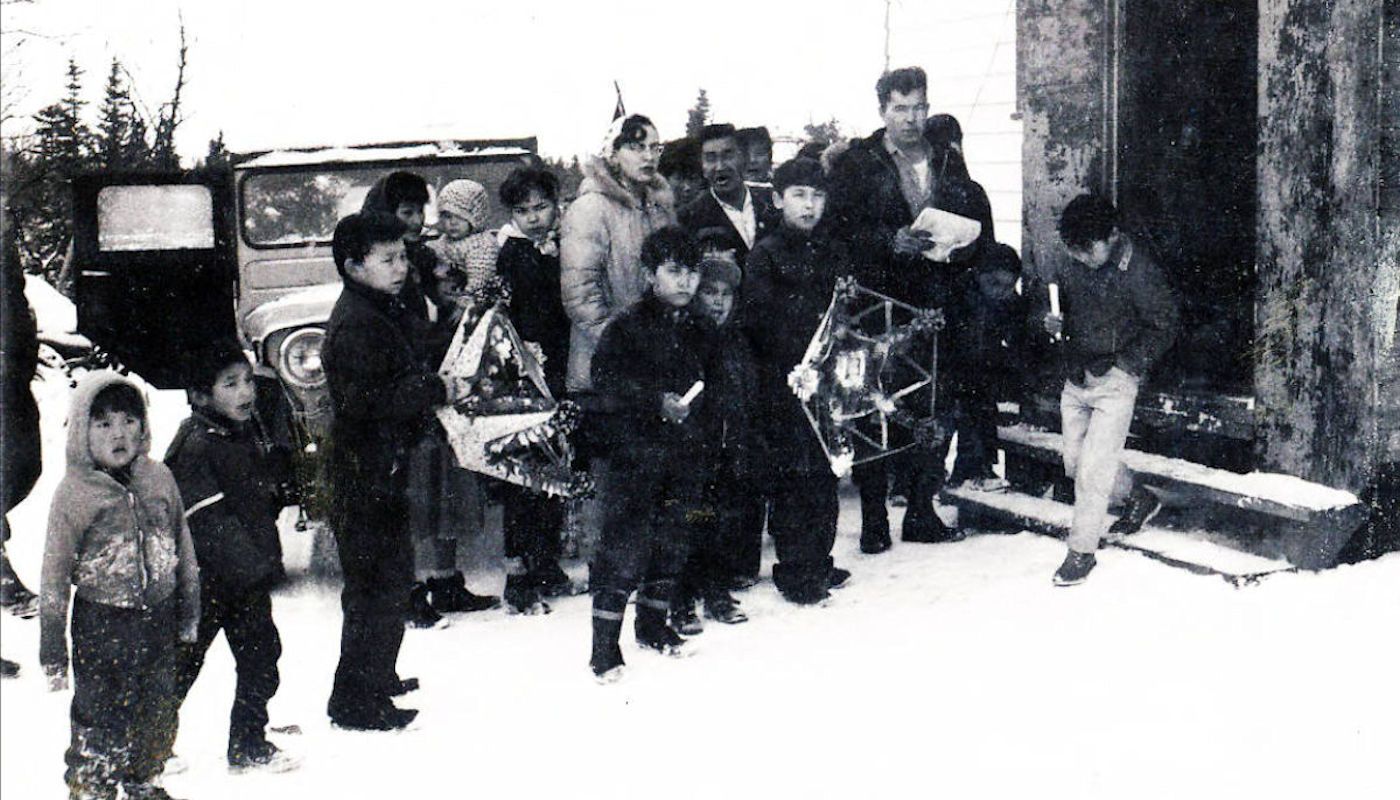 Kiatagmuit Eskimos originally lived on the north bank of the Kvichak River in the village of Kaskanak, and used Igiugig as a summer fish camp. At the turn of the century, these people moved upriver to the present site of Igiugig. The name Igiugig, originated from a Yupik word igyaraq, meaning “like a throat that swallows water”. It is derived from the fact that we are located at the mouth of the Kvichak River (on the south bank) at its outlet from Lake Iliamna; the river “swallows” the lake. The population is 64 people primarily Yupik Eskimos, Aleuts, and Athabascans.

Residents can trace their roots to the surrounding villages of Branch, Newhalen, Kaskanak Flats, Big Mountain, and Kukaklek Lake. Our people originally lived 7 miles downstream and used Igiugig as a fishcamp, but at the turn of the century they permanently settled here. Several residents are descendants of reindeer herders. There were Laplander reindeer stations located near Igiugig around 1905.

The Lake Iliamna drainage is known for its trophy rainbow trout and the Kvichak River boasts the largest sockeye salmon run in the world. The Mulchatna Caribou herd of 40,000 plus caribou passes seasonally near our village. Most residents travel around town or to other villages like Kokhanok, Levelock, Newhalen, and Iliamna by boat, ATVs, and snowmachines.

The Igiugig Tribal Village Council publishes a monthly newsletter called "Igyararmiut Qallemciit". Igiugig is a member of the Lake and Peninsula Borough and School District. Enjoy viewing our pictorial display in the airport hangar building to learn more about the culture, values, and people of Igiugig.

Igiugig has cultural influences from our elders, and the ever-changing world we are in today. Dances, traditions, and stories have been collected and documented to further our knowledge of our history.

In this new century, old and new are converging, making our village one that rides between two ways of life. Living between two worlds, the villagers of Igiugig know both about their history and culture and the technological world we live in today. Our culture and history are passed down from our elders, through stories and experiences shared with the younger generations.

Subsistence is the practice of hunting, fishing, or gathering food to live on (not to resell), and is practiced by almost all the residents of Igiugig. Fishing for red salmon and gathering berries in the summer as well as hunting caribou or moose in the fall and winter constitute the primary subsistence activities of the village. In the past, our elders survived primarily on subsistence hunting and fishing, spending summers in Igiugig at the fish camp; tracking caribou in the fall.

Summers today are spent setting out the net to catch sockeye swimming up to spawning locations. It is not unusual to see the elders of Igiugig surrounded by the younger generations, eager to learn the old ways.

Igiugig is one of many villages that hold onto the old Yup’ik language. Communication between the elders is mostly in Yup’ik. Persons in Igiugig have a thirst of this language, and many adults can understand when elders talk amongst each other, but they have little knowledge of speaking it.

Stories from elders (see Oral Histories below) such as Mary Olympic, Mike & Dallia Andrew, and Georgie & Annie Wilson tell us more about how they grew up. As a child, Mary Olympic and her family lived in Kukaklek and traveled to Igiugig for the summers. On clear days, she can see the mountains she lived near as a young girl. Mike Andrew grew up in Branch River and shares his stories of hunting and fishing. Georgie Wilson trapped as a young man and still does today.

Our culture and way of life is taught to us by the elders and by the ever changing lives we lead, but we still know where we came from and how we got here.

We have joined with Alaska's Digital Archives, made possible through our IMLS Enhancement Grant, to share glimpses of our past with our friends and family whether they are here in Igiugig, or living in Anchorage, Fairbanks or across the world. View Archive. (Link will open in a new window.)

Project Jukebox is the digital branch of the Oral History Program at the University of Alaska Fairbanks. The Oral History Program is part of the Alaska and Polar Regions Collections of the Elmer E. Rasmuson Library at the University of Alaska Fairbanks. The program was established in 1981 to collect and curate audio and video recordings that relate to various aspects of Alaska's history and the people who have contributed to its rich heritage.

Links will open in a new window.

To help you learn more about the history, culture and lifestyle of Igigug and the surrounding areas, here is a list of suggested resources. Many can be found in our local library.

An Alaska Anthology: Interpreting the Past, James Crutchfield

Eskimo Essays: Yup’ik Lives and How We See Them, Ann Fienup-Riordan & Giulio Pontecorro